skip to main | skip to sidebar

S.O.B.'s and other Surprise Party Tales 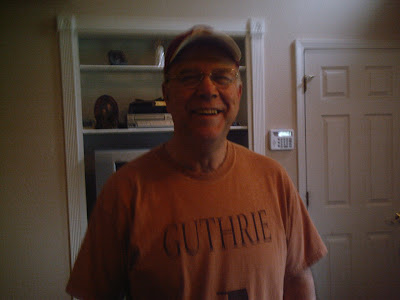 As many of you know, my daddy just celebrated his birthday about a week and a half ago (I posted a WW in honor of it). This weekend, we had a special surprise party for him at my home. And so I have some advice for all of you who might be entertaining such a notion yourselves for someone you love.

1. First, consider whether you live in a family full of big-mouthed people . By this, I mean people who would get kicked out of the priesthood or disbarred from the legal profession immediately due to the giant orifices with the flapping tongues in the fronts of their heads. Don't host a party with the word "surprise" in front of it if you have such a family. Just don't. 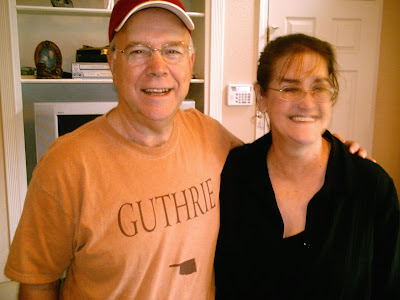 Not mentioning any names but here's Dad and the bean spiller (Aunt Deb) herself...

2. If the person for whom you are giving the party cannot stand not knowing what's going on and is like a bloodhound on the trail at the first hint of a secret, again, DON'T MAKE YOUR PARTY A SURPRISE ONE.

3. If the person for whom you are giving the party should happen to find out about said party (and he will) and you decide to keep his knowledge a secret so as not to ruin the experience for everyone else (especially those who have traveled hundreds of miles in one weekend just to be there), THINK AGAIN. The other parties will find out the truth at the last minute and BLAME IT ON YOU!!! even though you were not the one who squealed.

4. If those parties who found out at the last minute you kept the honoree's knowledge a secret should get mad at you and then abandon you in the kitchen to do all the work while they go off into the other room like the grand host and hostess and talk to the other guests (all the while talking about you behind your back) DO NOT CONTINUE TO SLAVE LIKE A MARTYR IN THE KITCHEN. Go right into the room with them, sit your ass in the chair, kick your feet up and say, "We'll eat when I get some help."

5. Do not allow your brother 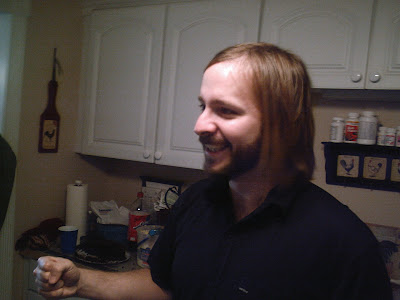 (who used to pick on you mercilessly just to get a rise out of you as you were growing up) to bait you with accusations until you scream, "You sons of bitches!" no matter how much the parties mentioned in Point 4 deserve the title. They will only laugh at you later and your temper tantrum will go down in family lore. 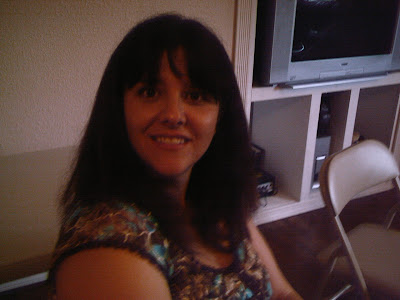 Mz. Jackson, when she is not calling her brother and sister Sons of Bitches.

6. Do not blame your husband, your only remaining source of help, just because he's the one who blurted out that the honoree already knows about the party. He will get pissed, tell you off, retreat to the bedroom and watch baseball in an absolute state of rebellion.

7. Do not expect your honoree to be on time just because he knows about the party. Something will happen to delay him, and everyone will grow hungry and tired of rushing to the window each time the dogs bark at a passing car. Then the crowd will begin to plot mischief against the honoree, like disappearing before he gets there or flipping him off in unison when he emerges through the front door.

8. Always cook a lot of extra food, even more than you would normally imagine to need for a surprise party. When the honoree is late, the guests will grow so famished that when it finally is time to eat, they will load up their plates so fast the food will disappear and there won't be enough to go around.

9. And finally, always remember that it is not the surprise part that is important. What is important is that you honored a person you loved and are so glad to have in your life~even if they can be a royal snoopy shitass who enjoyed sniffing out the secret more than the surprise itself and then sat back and grinned like a Cheshire cat at the mayhem he caused. ~Mz. Jackson lets out a grand, sentimental sniff and wipes her eyes with her embroidered hanky~ I love you, Daddy!

Note: A special thanks goes out to my little sister-in-law, Fancy Pants, who at least helped me make devilled eggs, even though she'd just driven hundreds of miles. She was NOT included in the SOB remark...
Posted by Mz Jackson at 6:42 AM 23 comments:

Last night after the kids watched a drama skit at youth service, my youngest daughter, Sweet Baby, commented that my eldest daughter, Her Royal Highness, would make an excellent Satan (or 'devil'as she called it) in the next drama.

Hmm. Was this a compliment? You decide.
Posted by Mz Jackson at 3:43 AM 4 comments:

Today is my baby sister's birthday and in her honor I'm going to run an updated version of one of my very first posts about her called Musical Pearls Before Sisterly Swine. If you've already read it, scroll to the bottom of the post for a little addition to the story.

I would also like to send a Happy Birthday tomorrow to my Sister-In-Law, Fancy Pants, who is married to my brother, Mr. Prodigy.

And to think Mz. Jackson and her other sister, Mz. Blue Eyes, almost ruined a budding career in its early stages.

Many years ago (I'm not telling you how many years, Mz. Jackson does not reveal her age to friends or strangers), my mother was driving me and my sisters, Mz. Blue Eyes and Mz. Opera home from church one evening. Mz. Opera was about five, I was thirteen, and Mz. Blue Eyes was twelve. As we headed down the single-laned country road that led to our little house in the big woods, my mother asked Mz. Opera about her day at Kindergarten.

"We learned a new song!" Mz. Opera said, her big eyes shining with excitement.
"Oh, we would love to hear it," says Mother with motherly enthusiasm. "Wouldn't we, girls?" she asked-but-really-commanded Mz. Blue Eyes and myself.

"Oh, yeah, yeah," we both muttered. After all, we would much rather discuss the sweaty, prepubescent boys we saw at church than listen to some nursery rhyme set to song, but whatever. Mother had spoken.

Little Mz. Opera drew her body up straight, pointed her black Cherokee eyes heavenward, and belted out in true opera fashion the following:

Did Mz. Blue Eyes and I hear the budding and brilliant voice of a future star? Nope. All we heard was one word: pussy. And since we'd recently learned on the school bus (rolling school of smut education) that the word could mean something other than cat, we both burst into laughter.

Poor Mz. Opera was completely smashed. She shut her mouth immediately, gave us both an accusing glare, and sank back into her seat.

Mother was mortified. "Hush up, you two! That was beautiful, Mz. Opera! Oh, please keep singing!"

I, smitten immediately with the guilt that is integral to my nature, begged, "I'm sorry, Mz. Opera! We weren't laughing at you! We were laughing at..."

I stopped here. Now how was I supposed to explain why we were laughing? To a little five year old? With my mother well within slapping range?

I looked to Mz. Blue Eyes, but she just shrugged. Truth be told, she'd been a little jealous of Mz. Opera since the day they brought her home from the hospital and had found her to be somewhat of a pesky annoyance ever since. Such is sisterly love. No help there.

I stammered, "We just thought the song was funny! Your voice is so pretty! Sing some more."

But Mz. Opera would not make another peep. In fact, she didn't cast her musical pearls before her sisterly swine for at least another ten years. But when I heard her blast the roof of her high school auditorium when she sang the national anthem for her high school graduation before going on to study opera, I was finally released from my prison of guilt.

Ah, it feels good to be free. Sing on Madame Butterfly! Sing on.

Note: I found out later that Mz. Opera decided later that evening she was going to run away from us ungrateful hooligans who had no appreciation for her artistic talent. She made it all the way to the end of the first leg of our mile long drive before my brother, Mr. Prodigy, caught up with her and convinced her to come home.
Posted by Mz Jackson at 7:10 AM 3 comments:

A message from Mz. Jackson

This blog is in the process of being updated as of Dec. 2008...check back in for changes! 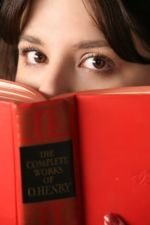 Fasten Your Seatbelts...It's going to be a bumpy ride.

Mz. Jackson, local journalist, wannabe New York Times Best Selling novelist, who works hard to further truth, justice and the American way. Of course the fact that she loves to write fiction, which is basically lying and getting paid to do so, doesn't seem to live up to her creed, but she has no time for such details... Mr. Jackson: Mz. Jackson's mostly sweet spouse who has a bit of a devilish streak that keeps one wondering: "What's that man up to now?" Her Royal Highness: Mz. and Mr. Jackson's beautiful eldest daughter, whose Aries nature endows her with a sense of natural royalty and prompts her to lord it over her siblings and anyone else who will let her. Jock Genius: The only son in the Jackson family whose high intelligence and athletic prowess make for an interesting combination. Sweet Baby: The Jackson's lovely youngest child, whose continuous struggle to dethrone Her Royal Highness makes for darn good entertainment. Also starring: Sunnybrook Rebecca: Mz. Jackson's esteemed friend and co-author of lies (writing partner). Mz. Opera, Mz. Blue Eyes, and Mr. Prodigy: Mz. Jackson's younger siblings, who have enough dirt on Mz. Jackson to bury her three times over...

I live in the Cherokee Nation of Oklahoma and the Cherokee (Tsa-la-gi) branch of my family traces its Oklahoma roots back to the Trail of Tears. Oklahoma is a Choctaw word which means "Red Man," literally translated Okla (Man) Homa (Red). The name of my "town," Nuda, means "Crazy" in Cherokee.

A Blessing for Cheryl F.: May every door open that needs to open. May blessings be upon you going in and coming out. May you find opportunities you didn't even know existed. May your family and children be blessed. Amen

Images at top of sidebar and bottom of page provided by Kidwell Photography in Tulsa, Oklahoma.